Yesterday I was determined to actually write a worth-while post.  It was great–full of handy tips and tricks for travelling with young kids.  And then it got erased.  Completely.  Gone.  I don’t have the energy to re-write it at this time so I think you’ll have to google that topic until I do.  Instead I’m going to write about some things that have been going on lately.

It’s been crazy.  My husband had the entire month of July off so we did lots of fun things including two vacations.  After vacation #1, I came home with the most resolve ever to work out and eat right.  This was because we basically ate nothing but fast food and junk for 8 days straight.  I don’t know how that Supersize Me guy ate McDonald’s for a month straight…I would have killed myself after a week.

But it was enough motivation to start up my diet/exercise.  Let me give you a little run down of this:  Ever since I had my first baby, I’ve been trying to lose weight.  I was always a skinny kid, so imagine my surprise when I was still chubby after giving birth.  I had never experienced this!  So I’ve tried lots of different things and the battle of the bulge is ongoing.

I’m not big–my heaviest was after having my last baby and I never want to weigh that again.  The pictures are embarrassing to me.  I know I’m not the biggest person ever but spending 2/3rds of my life being very skinny, this seemed huge to me.  It took me a year to to get down to my pre-pregnancy weight and then I thought I was fine.

But it turns out that eating cookies and donuts every night is not the best recipe for keeping the weight off.  The winter was long and cold and long.  Did I mention long?  And how hard is it to diet when it’s freezing outside??  All I wanna do is sit down with a warm brownie and watch a movie.

So I started gaining weight again.  About five pounds.  In the past, my weight has fluctuated a little and it eventually settled back down.  But these five pounds were not settling.  They were staying.  And so I’d diet a few days or run for 10 minutes and WHAT?  It’d still be there.  It was clear–I’d reached the age of weight gain–where the weight comes and doesn’t go.  And takes a heckuva lot to get off.

So here is what I’m doing now:  I’m training for a half marathon. 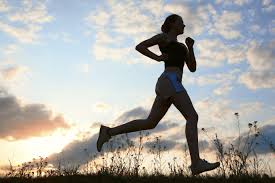 At first, I started to train for a 10k.  I am the worst runner ever.  The most pathetic runner.  The can’t-run-one-mile-without-stopping runner.  But I got the Couch to 10k trainer app and it starts out really easily.  You run for one minute and walk for a minute and a half.  Several times.  Then you go home.  Totally doable.  And if you think about it, it makes sense that running is hard for most of us who are untrained.  You wouldn’t go play in a championship basketball tournament without training first.  You wouldn’t go play a piano concerto without hours of practice.  Like everything else, running requires training.

So I’ve been running about five times a week for the last few weeks.  And some days it’s still really hard.  But I’ve been trying to figure out how to have really good runs and what things help.  And the last several days I’ve been suffering with some terrible stomach pains. I have run one mile without stopping but that is all.  Not 3.1 miles.

I have my first 5k in three days.  And let me tell you, I’m nervous.  Trying not to be, trying to tell myself to just take it slow and don’t compare myself to others.  But I’m worried about my stomach pains and side cramps.  I’m worried about hitting a wall where I just can’t go any further and then I look like the pathetic out of shape girl who is limping at the side of the road, trying not to throw up.

I will keep you posted.

One thing that I didn’t expect was to love it.  I love going out on the trail each morning, getting an hour completely to myself with no whining kids, to feel like a person instead of a mom.  It’s rejuvenating.  And the exercise just pumps me.  The music I listen to helps me run harder and faster and often I will close my eyes when I’m running and just feel completely…free.

My 10k is August 31st.  And the half marathon is in October.  That is a lot of training but I’m excited.  I want to be a runner.  I want to accomplish a thing that I truly never thought I’d be able to do.

Oh yeah…I’ve lost those 5 pounds since starting.  A lot of that is my diet which I will talk more about later.  But it’s awesome.