I did a bathroom makeover!  And it makes me so happy.  This bathroom has been frustrating for me, since it’s very small and has almost no storage.  It serves as our master bathroom, so no storage has been a serious issue.  Before I made it over, I had these ugly bathroom wire storage towers and other kinds of containers that took up a lot of space and made the room feel even smaller than it is.  Well, it wasn’t horrible.  I did try the first time I decorated.  Look in the mirror reflection at the opposite wall.  I HATE how those towels are just randomly hanging there.   And as cute as that IKEA cart is, it took up a huge amount of space in this small bathroom. 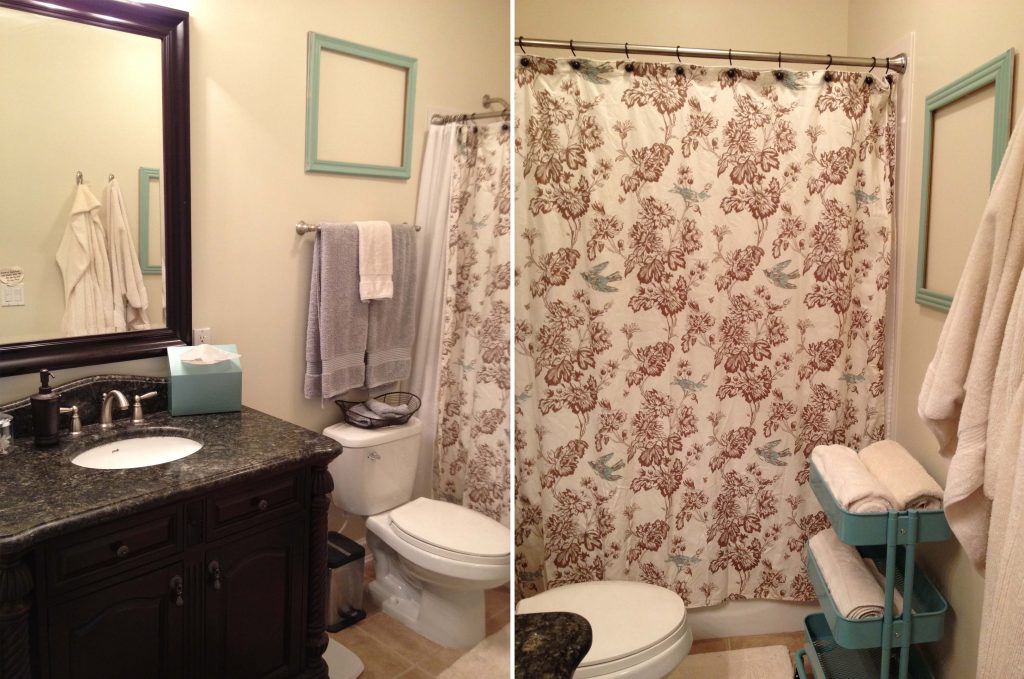 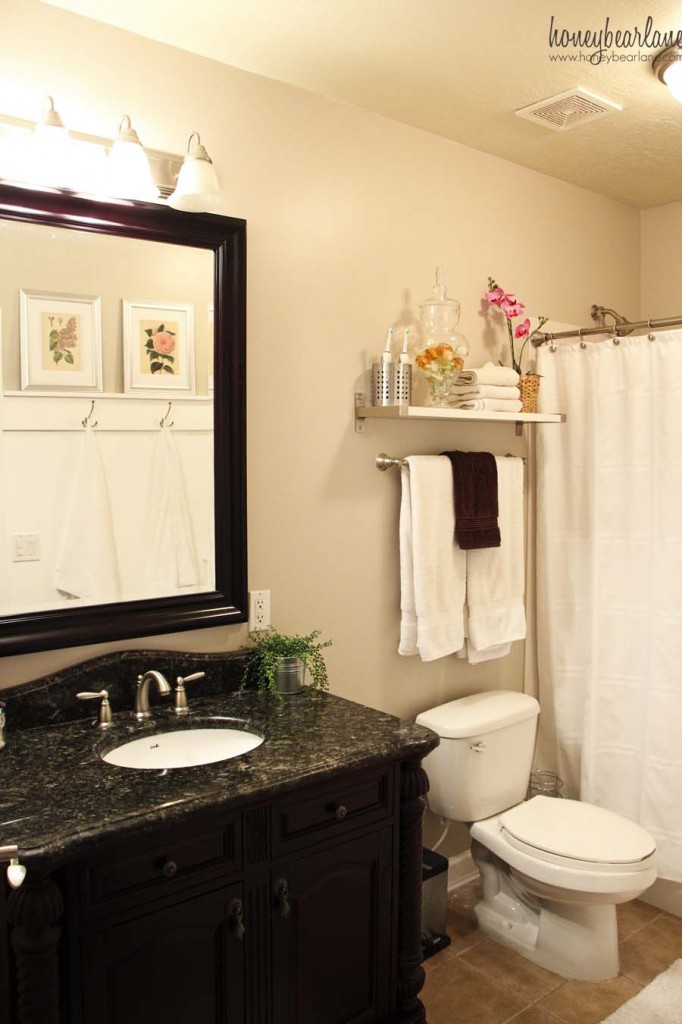 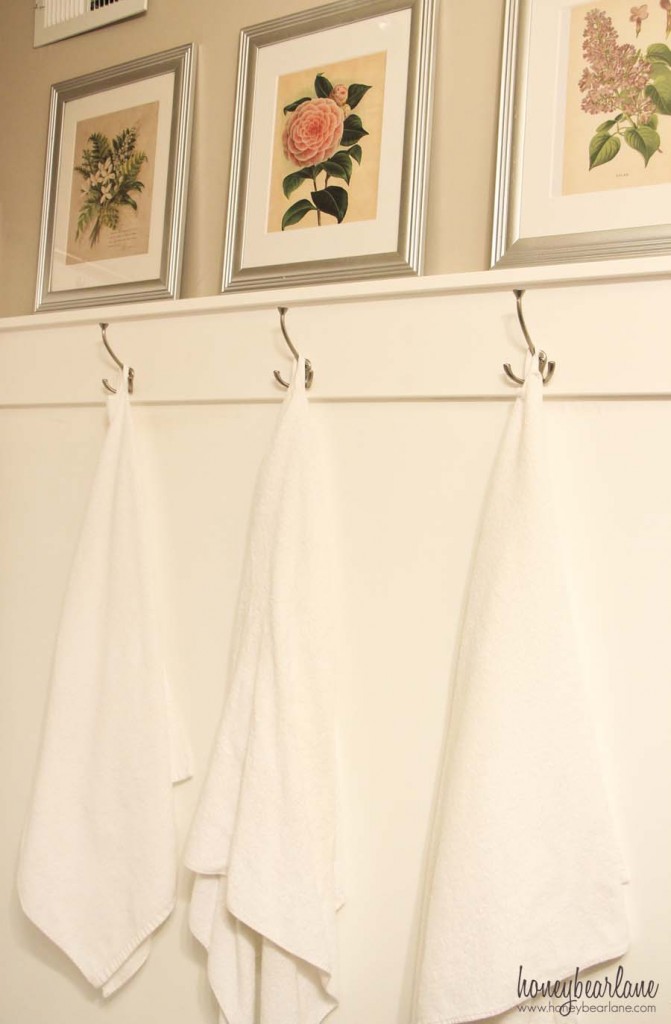 One day I had HAD it, so I just went to work organizing everything.  I moved out all excess storage containers and cleared out everything under the sink.  Under the sink had been pretty much not used because I just stuck everything ‘weird’ under there–mismatched towels, rags, boxes of random bath supplies, etc.  I sat down with a big garbage bag and threw out like half of the stuff I couldn’t believe we brought from Arizona.  Then I found several plastic zipped containers that we just happen to have and organized everything.  Everything found a spot under the sink—can you believe that?? 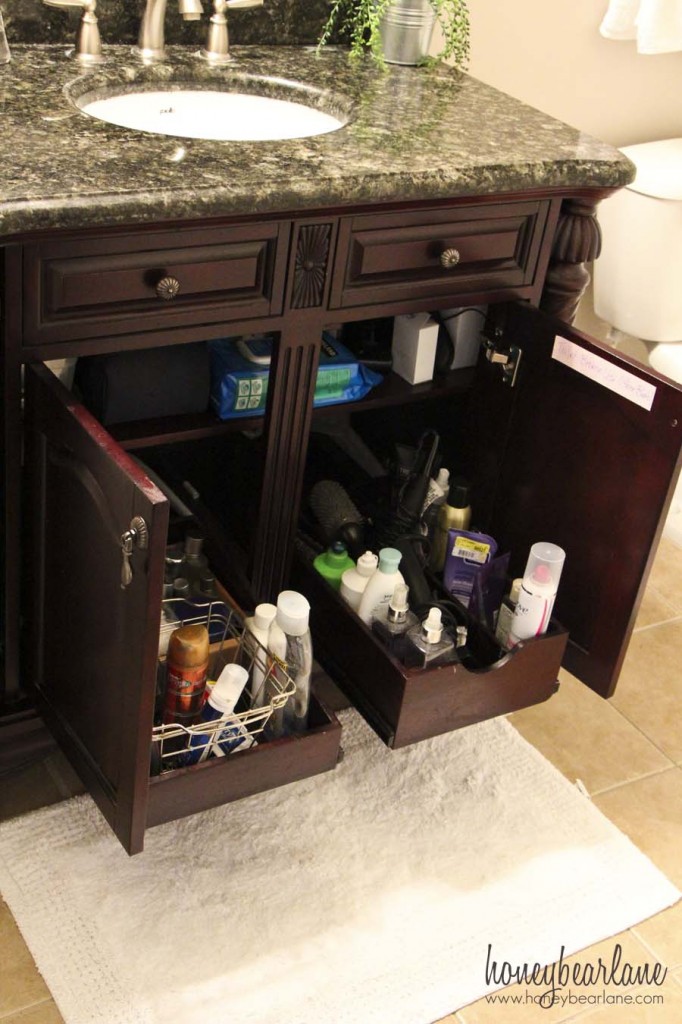 It’s still not exactly ideal because it’s annoying to reach down to the bottom shelf to grab everything I use and {sometimes} things stay on the counter longer than they should —cough cough– but it’s much better to not have the huge storage tower.  I moved some of the extra linens to the storage closet and put the rest in various other spots around the room. 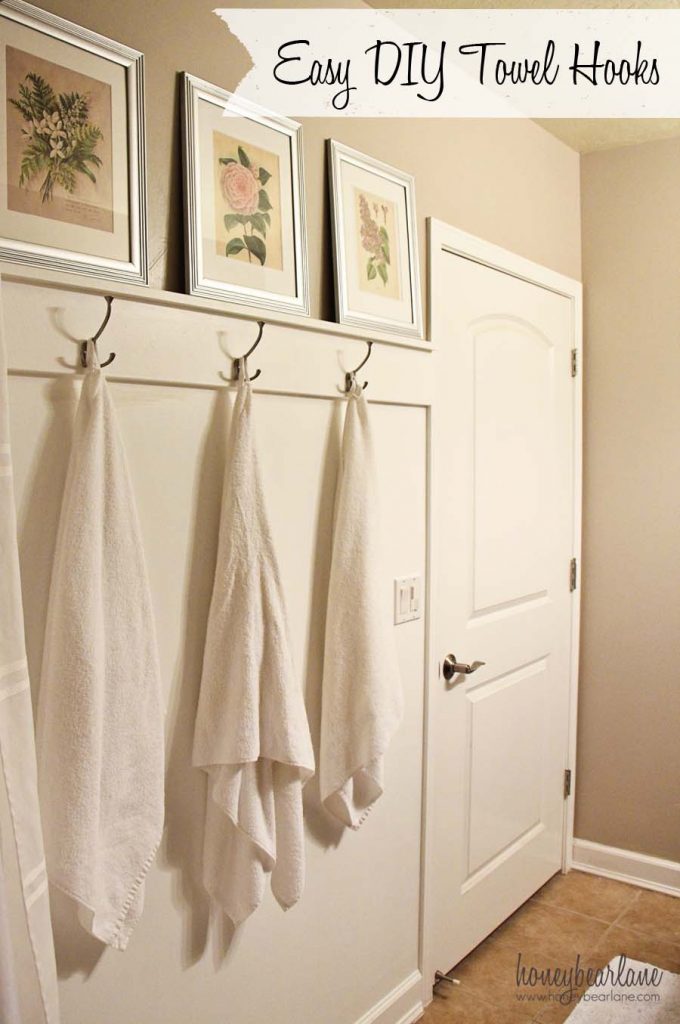 The towel hooks are my favorite part, and are so beautiful in this small bathroom.  Since it has the white paint underneath, it opens up the space a lot.  And now I have a place for our towels to hang and a handy little picture ledge.  I got these hanging towels at IKEA for super cheap and they have a little hanger thing on them already.  And what else is awesome about this?  My husband is apparently physically incapable of folding a towel nicely once he’s used it.  So we would always have one neatly tri-folded towel on the rack (mine, yes) and then one towel hanging sloppy on the other side.  And now I don’t have to re-fold the towel every day.  I can store more towels on our old rack and they rarely get messed up.  Bonus!  Tutorial on this soon!

* The framed prints are from The Graphics Fairy (free!) 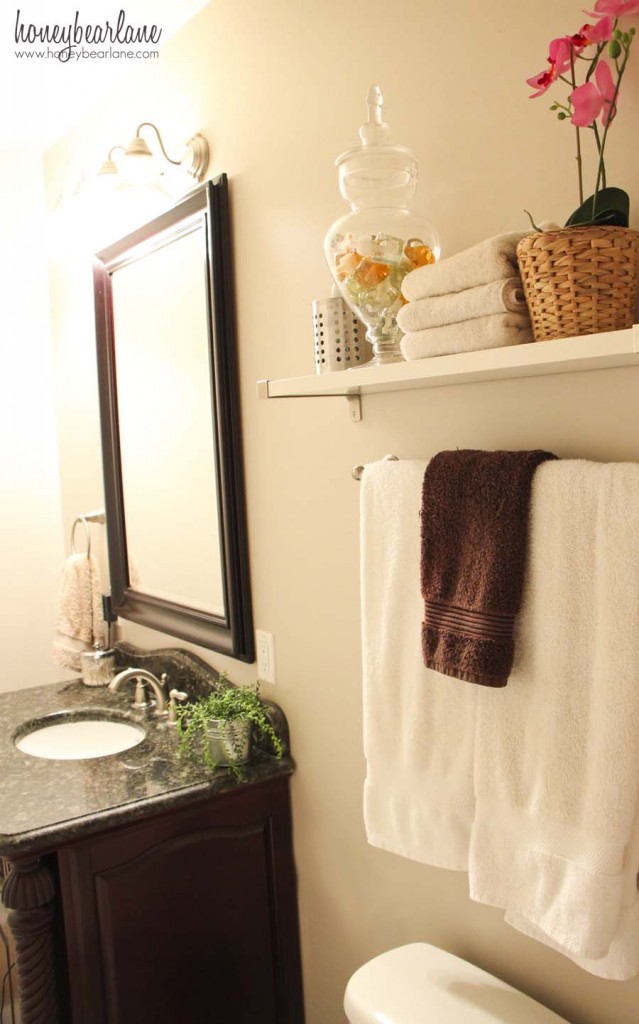 So the towel organizer made the biggest impact on the room, but once I’d finished it, I realized how much I disliked the paint color of the rest of the room.  I really didn’t want to paint, but I ended up doing it.  It took some tries to get the right color, but I ended up painting the room in ‘Wheat Bread’ by Behr from Home Depot.  I love this color–it’s the perfect gray-brown-beige.  Since we have some dark wood on the mirror frame and vanity, I needed something that would be brown tinged,  but I didn’t want to do beige again.  And bathrooms are hard to paint y’all!  So many tiny things to paint around.  I also had to remove the clear grout around the tub since it was covering the old paint color and wouldn’t accept paint over it.  I re-grouted with a paintable caulk then painted over it. 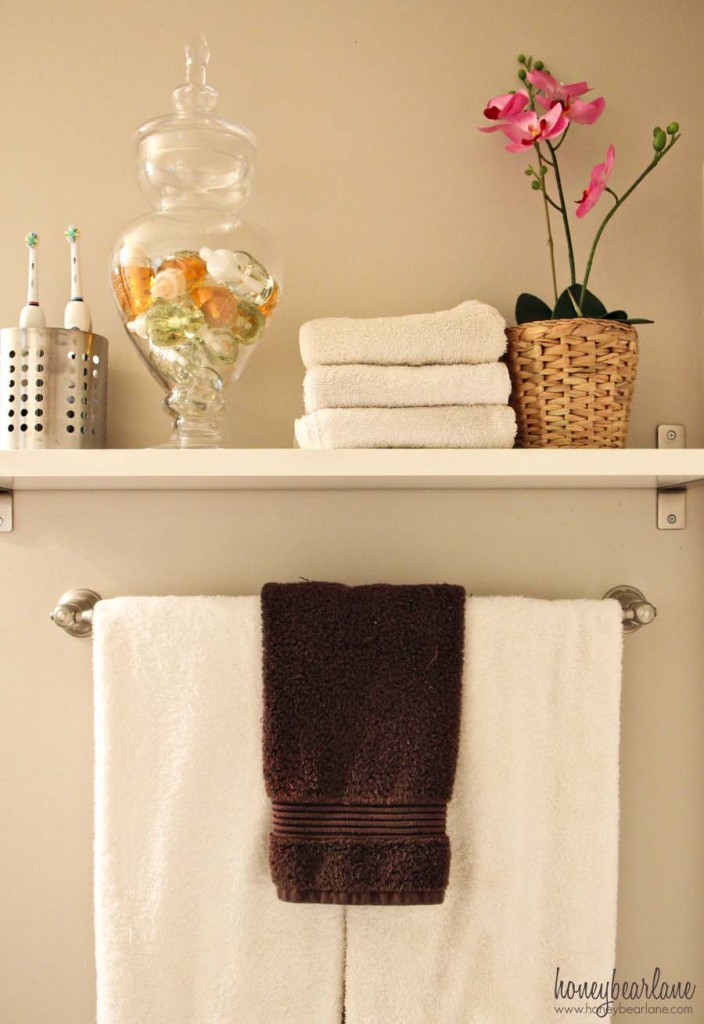 The final touches were to change out the shower curtain (I love simple white curtains in bathrooms) and to add this shelf from IKEA with a few accessories.  I love that faux orchid for a pop of color and life and the round kitchen spoon container holds our electric toothbrushes that previous lived on the sink counter and left gross white toothpaste rings behind.  And the apothecary jar is for pretty soap but I need to buy more so for now it’s holding these pretty Air Wick air fresheners which I have a ton of.

Another Before and After… 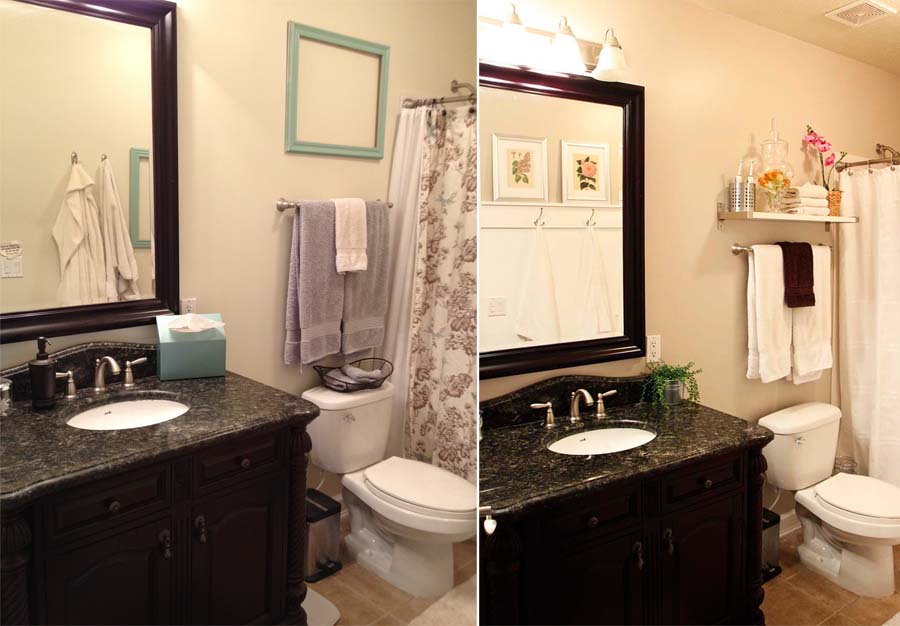 Everything has a place now –more or less– and it looks like a neat guest bathroom.  You would never even guess that this is the master bath for two people!  Haha–just kidding.  You would never guess when it’s clean.  That lasts like two seconds.

It’s not too hard to give your bathroom a makeover.  Just give it a fresh coat of paint and add the towel hook organizer for some architectural interest.  In my new house I have some big design plans for my bathrooms!  I love decorating guys, I just do.

This work is licensed under a Creative Commons Attribution-NonCommercial-ShareAlike 3.0 Unported License
285 shares