Thanksgiving is the time of year to gather friends and loved ones around and reflect on all the blessings of the year. Of course, along with all of the good food and festivities beautiful flowers will set the mood and the table for a long leisurely meal. Thanksgiving is truly a holiday of peace and the celebration of daily work and the simple life. Hearts are turned toward home with a thankful heart, which in itself is a continual feast.

Incorporating home delivery flowers into the holiday is what makes Thanksgiving so special. Flowers represent and say much more with the intoxicating aroma and beautiful arrangements. Without saying words, flowers express the emotions felt so strongly by the giver. Autumn colors are in abundance during the season of Thanksgiving and flower deliveries make it possible to create lovely Thanksgiving floral arrangements. There are a few things to consider to bring the crisp fall autumn arrangement to the Thanksgiving table. Making a floral turkey thanksgiving centerpiece can make your holiday season complete just by following a few tips.

The size of the table and guests should be taken into consideration. The flower arrangement should not be overwhelming to the point that the family cannot enjoy conversation. Usually, the rule of thumb is elbow on the table to the fingertip is the desired height. This can vary but will range from fifteen to sixteen inches. The nice thing about this arrangement is that it can be used year after year just by using home delivery flowers and a turkey ceramic soup tureen. There are many choices of tureens and many sizes. They come in many colors and can be the most formal turkey imaginable to a simple single color. Usually with all of the autumn colors the turkey tureen will be complimentary to any table cloth and napkins.

Fresh Flowers for a Fresh Dinner

It is possible to put the fresh flowers in fresh water and this gives the opportunity to replenish as the following days go by. The holiday arrangement will last a little longer with this method. The other alternative is to use floral foam. It is wise to prepare the work area with newspaper before beginning the harvest table project. There is a large assortment of fresh flowers from home delivery flowers to choose from. Spicy-hued fall colored stems create a harvest-inspired backdrop. Chrysanthemums or mums, as they are commonly called, are a very good choice because they are in the harvest season colors and really make a statement, even if placed in the soup tureen alone. Gerbera Daisies are an especially pretty accent flower in this particular arrangement. 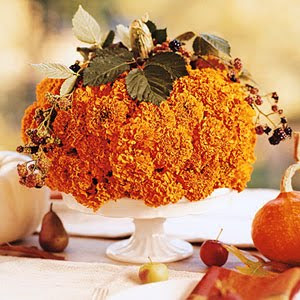 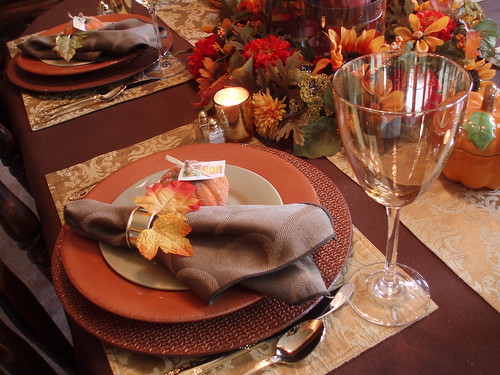 A serrated knife will be needed to cut the floral foam piece. Make sure it fits snugly into the turkey soup tureen. Remove the floral foam after the fitting and soak in the water until it is saturated. Replace the floral foam into the soup tureen. The tallest flower should be put in the center of the foam. At this point the other flowers will be placed lower than the focus point flower, continuing all the way around. Darker colors should be closer to the edge of the arrangement and move in with the lighter colors. The stems should be cut in succession and graduate down to shape the arrangement proportionately. The smaller flowers, Gerbera Daisies can fill in the gaps.

Experimenting is a Part of Creation

Don’t be afraid to experiment and rearrange if necessary. Various colors of fall leaves can be a very pretty accent by using floral pics and wrapping with floral wire. The other option for the centerpiece when not using the floral foam is to use the home delivery flowers alone with water in the tureen. The water can be changed every couple of days to ensure freshness for a longer period of time. Home delivery flowers are a wonderful way to make thanksgiving special for friends and family. 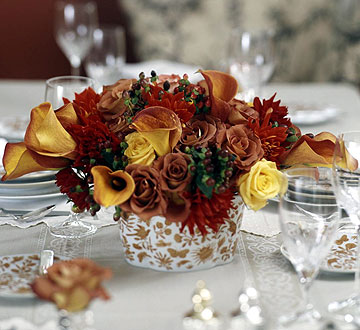 Patricia Hall works part-time for a florist but loves to surround herself with flowers at any given point of time. Even in her free time she loves to involve herself with everything flora and fauna.
‘To me there is nothing more beautiful and global as the language of flowers – it is the easiest to understand all around the world in the same way. That is one reason why I truly admire flowers for what they represent in some ways – unity of all mankind!’