You’d think that me, being a huge “DIY” person, would also be one to go crazy for birthday parties.  Surprise!!–I’m not.  Well, that depends.  I have done some extravagant parties in the past.  But for my daughters party, I’ll admit I’m usually pretty tired because her birthday falls right near Thanksgiving.  So by the time I get to planning her party, I’m already exhausted from holiday decorating and house tours and all the other stuff that accompanies the holidays.  But this year we put together a cute little party that the girls all loved!

My little girl is a tomboy…not your typical Disney princess-loving, doll-playing, little girl.  So when it comes to a party, we were kind of struggling to come up with some sort of theme.  However she does like to play with makeup and nail polish.  So I thought we could do a little hair and nails birthday party with the girls.  And man, if you search Pinterest for makeup parties, you will see some pretty amazing party ideas!  I kept mine simple and inexpensive and I still think it went well, so I want to share my party with you.  You don’t always have to spend hundreds of dollars to have a fun party! 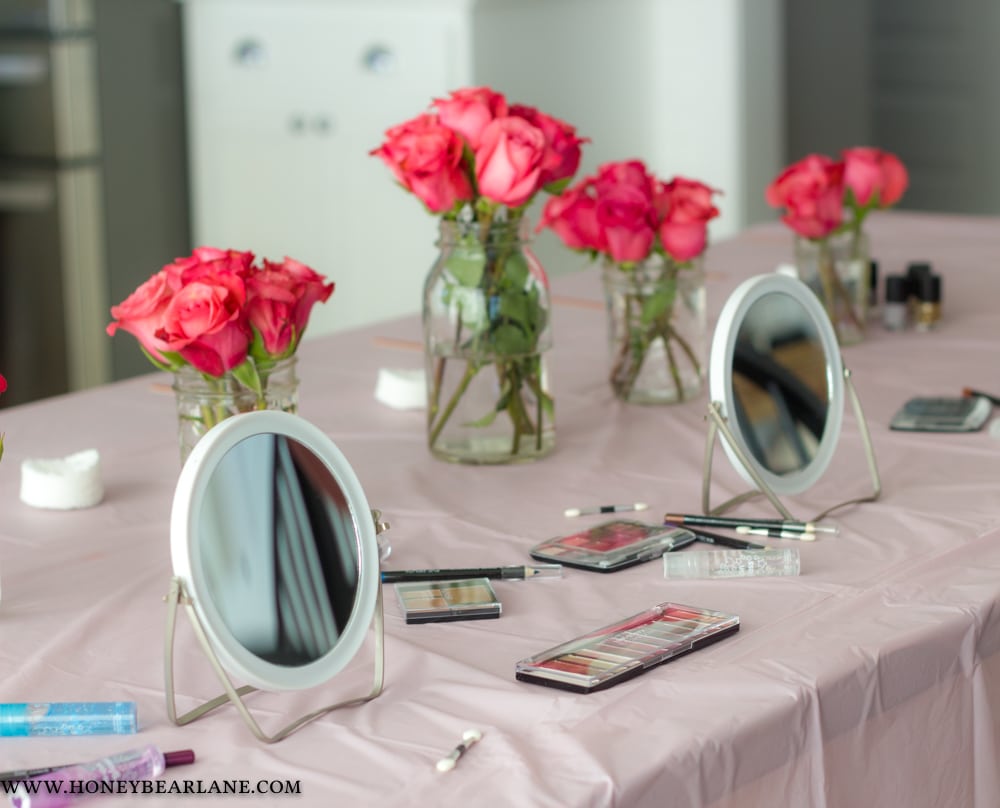 Makeup:  I got a brand new HUGE makeup kit at Walmart for about $15.  It had 4 pallets of eye shadow, about 10 different nail polishes, some lipsticks and other things.  It was one of those gift makeup kits.

Mirrors:  I also found some mirrors with stands there for about $5 each, so I got 3, since I was trying to keep costs low and that was all they had anyway.  However I would probably get at least 2 more because the girls were kind of fighting over the mirrors.

Nail Polish:  I had a big container of nail polish remover that I poured into little bowls for them and provided cotton pads and swabs for them to use.  I used the nail polish that came in the makeup kit.

Pink Tablecloth:  I picked up a couple of pink plastic tablecloths to protect my table and these worked great.  They aren’t the prettiest though so if you’re looking for pretty, I saw some people use wrapping paper on their table and it looked super cute.

Flowers:  I got 2 dozen roses at Costco which I used as a centerpiece.

Balloons:  I always have balloons at my birthday parties.  I got the giant mylar “6” at Hobby Lobby and had them blow it up at PartyLand, although they sell them there too.  I love mixing in the long curly balloons in my balloon bouquets!

Favors:  For my favor bags, I got them each a little nail polish, lip gloss, slap bracelet, and a few other things as well as candy.  I filled them with gold shredded paper.  I found all the favors at Walmart also. 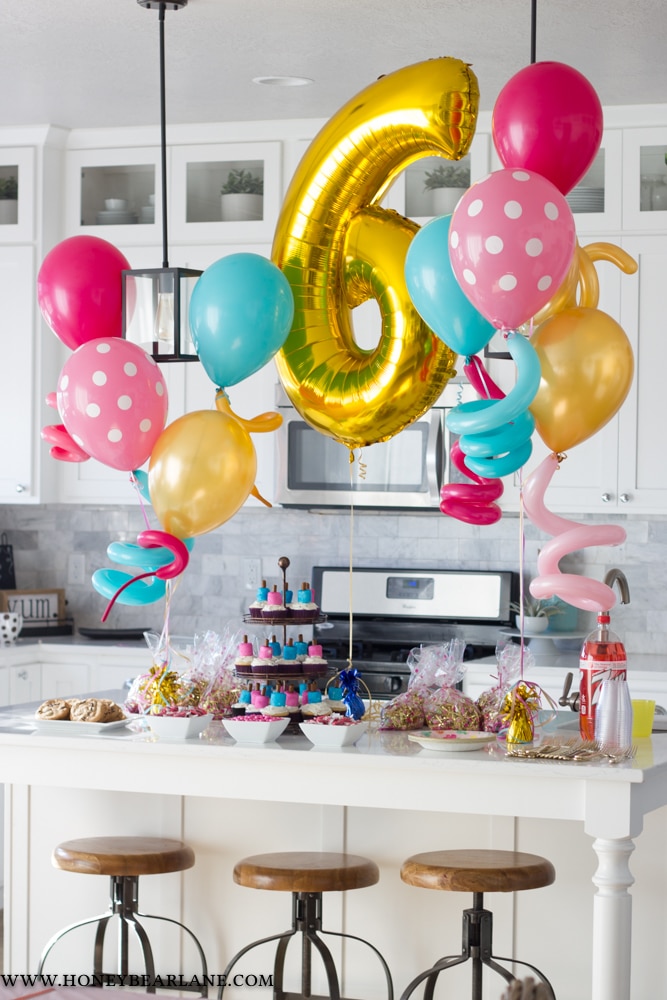 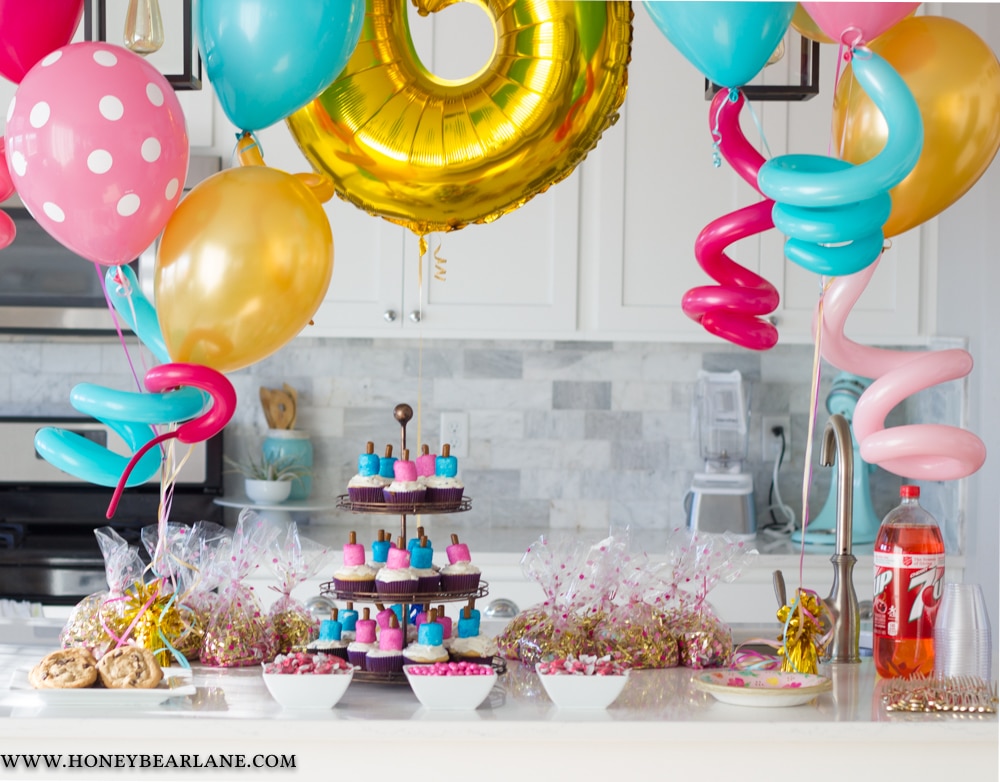 Cupcakes:  I found this cute and simple “nail polish” cupcake idea on Pinterest.  You just get a marshmallow a little wet (spritz it in water) and then roll it in sprinkles.  Then you get Tootsie Rolls and insert a half toothpick through it so the other end can go into the marshmallow and hold it together.  I made the in the morning so they could dry.  They turned out so cute! 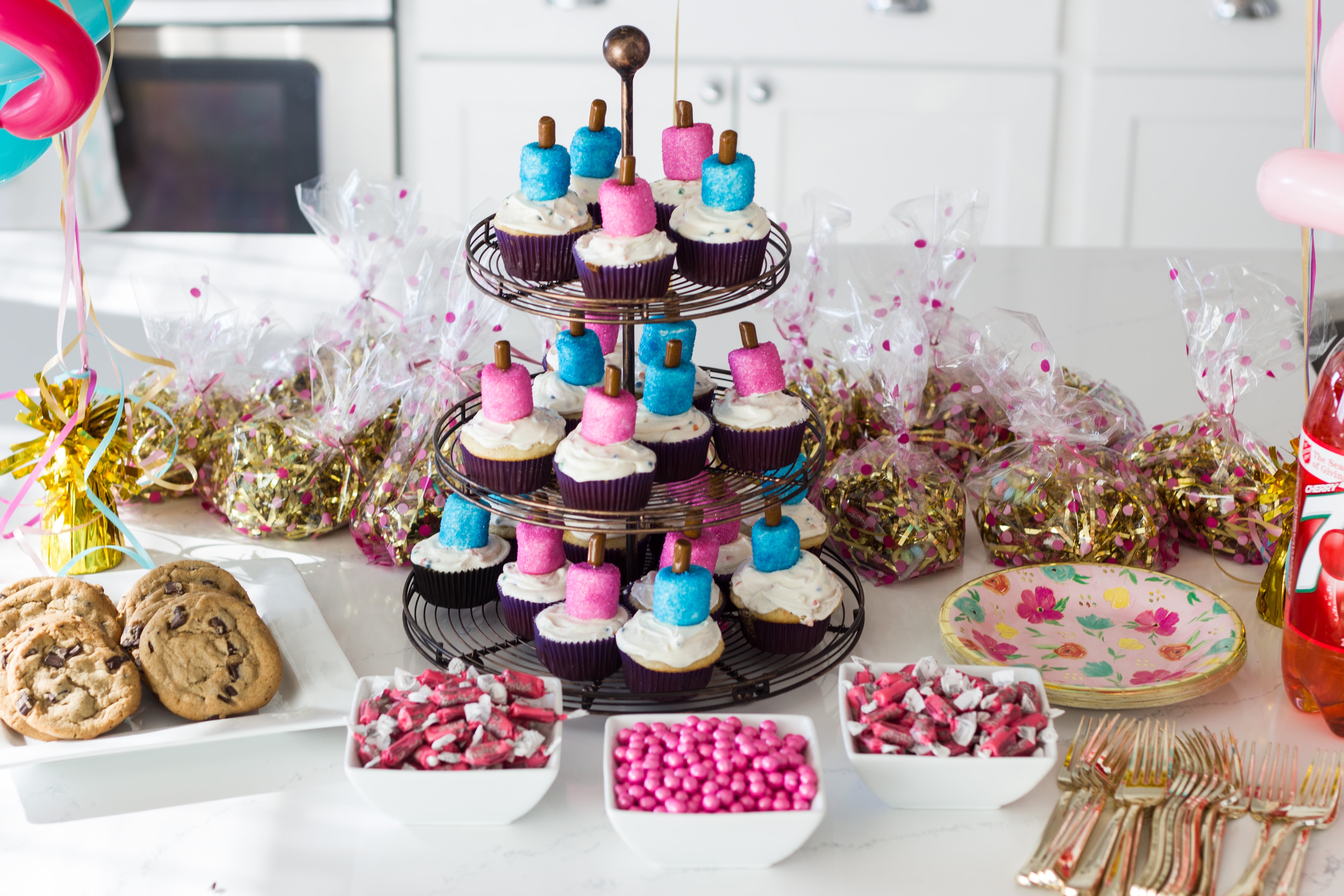 When the girls arrived, they all found a spot at the table (I have a large table but you might want to set up more tables) and I had a couple friends come over to help out.  One of my friends supervised the makeup, we took turns supervising the nail polish, and my other friend did the girls’ hair.  Other than that we just let the girls all do everything themselves!  It was fun to watch them decorate their face and nails with the stuff.  They all got a turn doing makeup, nails, and hair, and so it ended up taking a lot of time.

Before we started, I told the girls that I thought they were all beautiful exactly as they are and that they didn’t need any makeup to be pretty.  But sometimes it’s fun to dress up a little so that’s what we were doing! 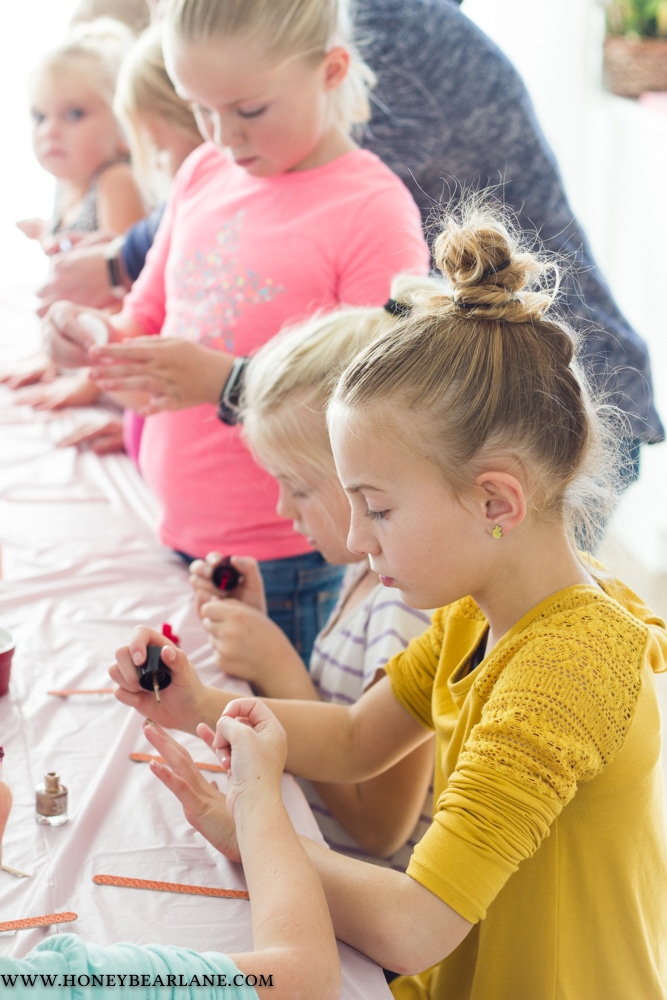 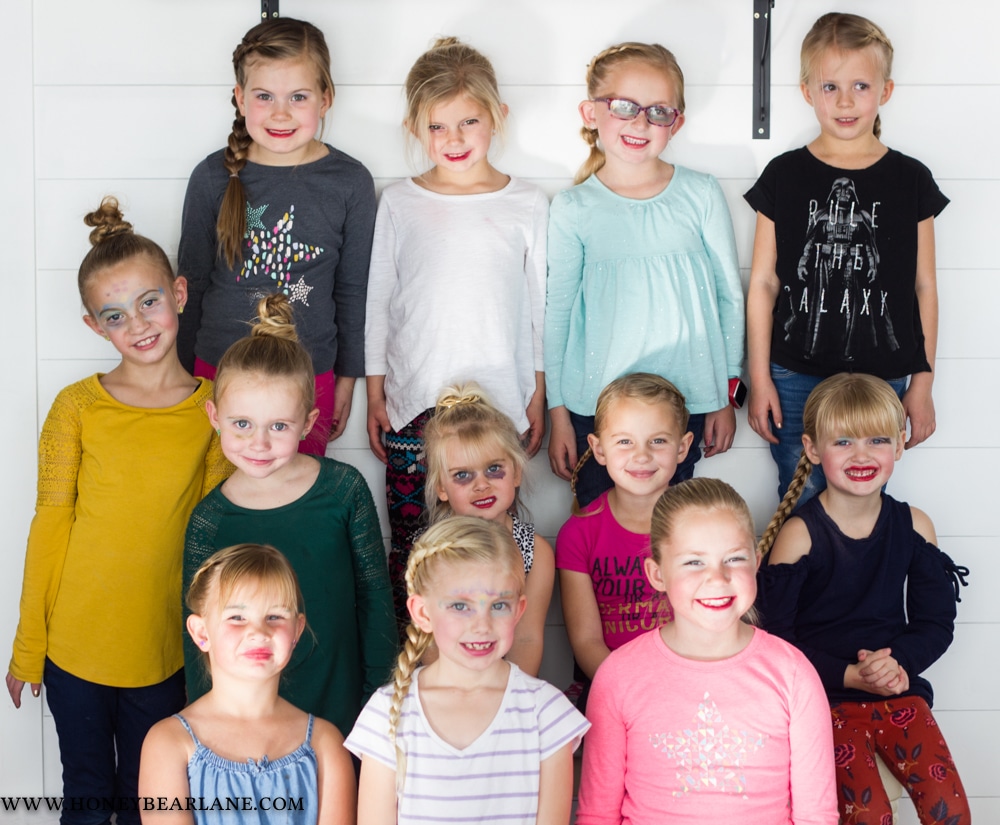 After the makeovers, we had treats and sang happy birthday and then my daughter opened her presents.  They played for a few minutes but then the party was over!  I hate when you throw a party and you are scrambling to entertain your guests.  This was a great way to entertain them for a long time.

I think our hair and nails birthday party was a big success!  As you can see, I didn’t go crazy with printables, decorations, supplies, etc.  There’s always a party of me that wants to, but this time I felt like it would end up costing a lot if I did it that way.  Little kids are easy to impress so you really don’t have to go overboard for them to have a great time!

This work is licensed under a Creative Commons Attribution-NonCommercial-ShareAlike 3.0 Unported License
297 shares