If you’ve been following along on Facebook, you know that I hit a new milestone yesterday…10 miles!  I ran 10 miles yesterday in 1 hr 50 minutes.  That’s not super fast, but it averages about 11 min pace.  I definitely got slower as the miles went by.  But just thinking about two months ago, I hadn’t even run my first 5k yet.  Many of you were asking how I accomplished this kind of progress.  I am FAR from an expert, but here’s my story:

How I Started Running

I have regularly run on a treadmill for several years now and I have never been able to run much more than a mile on it.  Why?  Because running on a treadmill is so incredibly boring that in order to keep myself interested, I would do intervals–meaning changing my speed frequently.  This is great for weight loss and heart rate, but not good for increasing running distance since you tire yourself out.  I am also not a person who can watch TV while I run…I need music with a good beat in order to stay motivated.

I bought the Couch to 10k app (a couple dollars–the free one is worthless) and started training that way, outside.  Starting out, I would run for a minute, then walk for a 1.5 min, for a total of about 20 minutes.  And each day you increase the amount of time you run and decrease the amount of time you walk.  It’s really not hard, and you can always repeat days or weeks if you need more time.

Once I completed my first 5k, I went home and collapsed in my bed.  Running 3 miles straight was exhausting and every part of my body hurt.  But a few days later, I did it again and wasn’t nearly as tired.  And I got a little faster.  My fastest 3 mile run was 30 minutes (I told you I’m NOT fast!) and I was very proud of myself.

After that, I started focusing on my next goal of running the 10k I had signed up for.  I only had a few weeks to train and at times I was really worried that I wouldn’t be able to do it.  But I didn’t put any pressure on myself…I didn’t plan on running the whole time.  If I was tired, I would walk…simple as that.  But I would run 4x a week–Mon, Tues, Thurs, and Sat, and I followed the program on my app.  If I felt confident then I would even skip days on the app because my 10k was coming up sooner than the training program called for.

On the day of my 10k, I woke up bright and early at 5 am (which wasn’t hard because I always can’t sleep the night before a race) and got ready.  I wore my black running tights and a tank top (which I switched out for the Swiss Days 10k shirt).  I got everything ready–my fuel gummies (Clif Shotblok) and electrolyte pill and a Clif bar.  I drove the hour to Midway, UT which is in a beautiful place and it was barely light by the time I got there.

Running Basics:  How I Fuel

About 45 minutes before the race started, I ate half the Clif bar, took the pill, and ate half my Shotblok.  The Clif bar provides me with the carbs I need without filling my stomach too much, the pill helps keep my body hydrated and prevents side aches, and the ShotBlok helps with calorie and glutamin intake.  Your body needs all these things while it’s working hard and depleting your natural resource.  You don’t have to take them of course, but I have noticed a difference in my body’s energy level when running longer distances…and if anything helps make running easier, I’ll do it!  Usually when I go running I will eat half or all of a Quaker Oats granola bar instead of the Clif.  Many people eat other types of fuel, like GU, gels, or even ones in jelly bean form.  I’ve only tried Shotblok and I have a bunch so I probably won’t be trying something else for awhile.

Here’s how the 10k went:  I think I did pretty well.  I kept a steady pace, and if at certain times I felt like I could go faster, I would.  This might have prevented me from having a stronger finish (because at the last half mile I was REALLY tired) but it was pretty fun to pass lots of people up!  Unfortunately, at mile 4 I dug into my little pouch to take my Shotblok again and my phone and key both fell out.  I couldn’t find the key for several minutes and had to get it from the cop standing by.  This kind of ruined the lead I had just gained on about 15 people, so I spent the last two miles trying to pass them again and wore myself out.  I finished it in 1 hour, 3 minutes, ave pace of about 10:30. 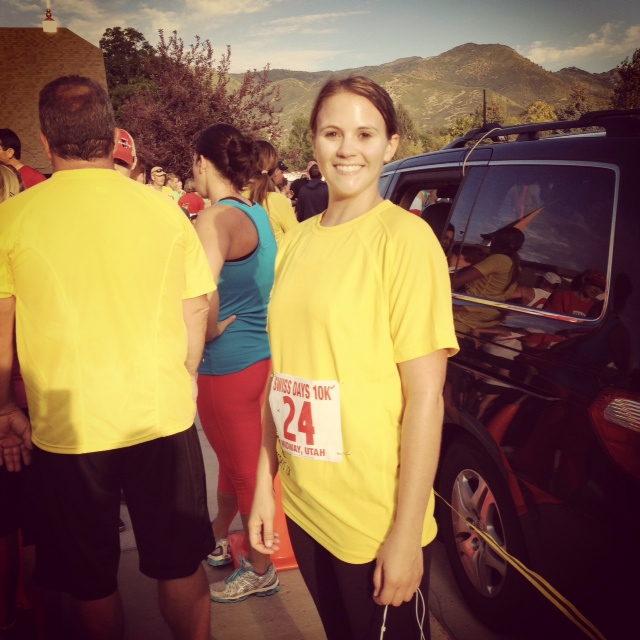 But here’s the thing…the 10k was actually easier for me than the 5k.  I didn’t go home and collapse in bed, though I was pretty sore and stiff the rest of the day.  But I think my body had started to better adapt to running longer distances and was in better shape at this point.  I had also eaten really healthy for the last 6 weeks so I had lost about 7 pounds from when I started and a percentage in body fat.

Running Basics:  How I Breathe

When I first started running, I suffered from side stitches in a bad way.  I would literally run for one minute and then get a stitch and have it during the rest of the run.  This made running absolutely miserable and tortuous as I tried to just run through the pain.  I knew it had something to do with breathing right, so I went looking for a solution.

I found a book called “Running on Air” by Budd Coates and started reading it.  Truth be told, I’ve only read half of it.  But what I did read has helped me in a HUGE way.  The author talks about how your body has the most stress put on it when your foot strikes the ground at the same time as exhalation.  And people tend to always exhale as they land on the same foot, usually the right foot.  That causes stress to the right side of you body and therefore, you get a side stitch.  He invented this thing called “Rhythmic Breathing.”  You force your exhalations to take turns on each foot strike.  You exhale on the right foot, then inhale for a couple counts and exhale on the left foot.  Does that make sense?  If you want a better detailed explanation, I recommend reading his book.

Ever since I started practicing Rhythmic Breathing, my side stitches have virtually disappeared.  I also focus on breathing gently from the diaphragm rather than the lungs.  When you are at the doctor and they tell you to take a deep breath, I always breath from the lungs.  But as I’m sitting around not thinking about how I’m breathing, I breath from the diaphragm.  It’s the best way to get the most oxygen to your body and much more efficient than breathing merely from your lungs.  Every time I find myself getting out of breath or a side stitch while running, I focus purely on my breathing, and it usually takes care of the problem.

Running Basics:  How I Increase Distance

Run outside, use some sort of mileage tracker.  Lots of runners use sports watches, but they are really expensive, so I haven’t gotten one yet.  I use the MapMyRun app for iPhone and it uses GPS to track how far you run AND how fast you run it.  Each day I decide how far I’m going to run and then start the MapMyRun app before I start.

Now that I’m training for a half marathon, I don’t use the 23k app I bought and just run according to how I feel and the goals I set for myself.  I only run Tues, Thurs, and Sat so my body can rest the other days.  I don’t feel like I progress very much if I run more than that.  On Tues and Thurs, I run 3-5 miles and focus more on speed and endurance rather than distance.  You’re supposed to run at an uncomfortable pace, faster than race speed.  This helps you to expand your lungs and works your heart.  It makes it easier to do a long run on Saturday at a slow pace.  Each Saturday I try to run one mile longer than I did the week before.  I run half the miles one direction, then turn around and come back for the last half.

And again, I have to stress how much of a difference running outside made for me.  It’s just SO much more interesting, so much more enjoyable.  There are things to look at and the fresh air in your body is such a great feeling.  It’s easy to increase distance because I want to see where the road takes me and what new things I will get to look at. 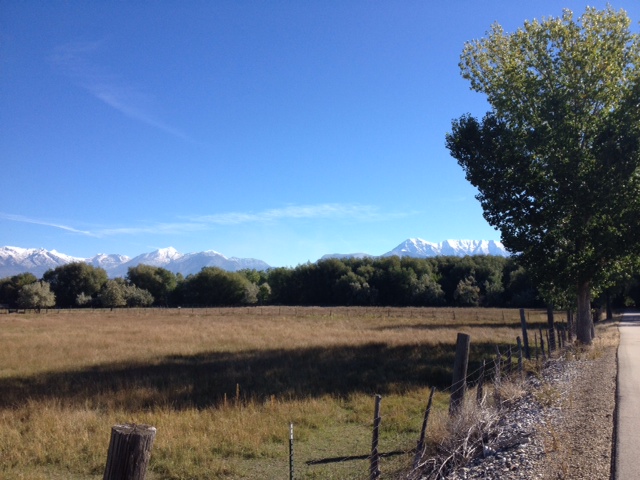 Running Basics:  What I Wear

When I first started, I knew I needed a good pair of shoes.  If you are going to take running seriously, you really do need a good pair of shoes.  I went to the Wasatch Running Center and got fitted.  This was so important for me because if I went to some sporting goods store I would have picked out the wrong pair of shoes for me in the wrong size and would have spent a fortune on crappy shoes.  Stores specially designated for running will have experienced runners working there who can help get you in the perfect shoe.  The guy who fit me ended up putting me in a 9.5 shoe, rather than an 8.5, my normal size.  I would have NEVER purchased a shoe in a whole size larger than me, but he said that when running long distances your toes swell up a lot and you need extra space in the toe.  He fit me in some Mizunos which are bright orange and look huge but I love them.  They breathe so well, are so light, and my toes never hurt.  He said I could run a marathon in those shoes…maybe I will!

I usually wear a running shirt or tank.  They vary in tightness and material…according to the weather outside.  I have some from Albion Fit and other places, but I also bought some from Target and Costco.  You don’t want to be warm when you first go outside…you want to be a little chilly.  Yesterday it was 40 degrees when I started out and I was wearing a sweatshirt over a tank with my long tights and gloves and a hat.  It was cold when I started.  But after a mile, I shed the gloves and sweatshirt and was perfectly fine the rest of the time.  I wear a hydration belt for my long runs and I’m able to keep Shotblok in there and my phone…I wear it tight around my waist so it doesn’t bounce around.  If I don’t have water on a run longer than 4 miles, I go downhill fast.  I get so tired and feel awful.  I usually fill two up with water and the last with Powerade.

I hope this post helps you with running…I know when I first started I poured over running blogs, trying to gleam information here and there about what helps, what is better.  There were so many things I didn’t know about running and I’m sure still a lot I don’t know.  But a post like this would have helped me a lot!  Happy running!