One of the best things I ever learned was how to use a cordless nail gun.  And buying my little Ryobi Airstrike 18 gauge brad nailer was one of the best purchases I ever made.  I have used this tool in countless projects and it is such a game changer in DIY.  Lots of people get an air compressor and a nailer which is also a great option, but would it surprise you to learn that I don’t even OWN an air compressor?  Haha!  I am not the best help when it comes to how to use a nail gun with an air compressor.  But my brad nailer is honestly SUCH a great investment so if you are looking into getting one, just DO IT.

They are super easy to use and although they might be a tad heavier in the hand than the ones with air compressors, I love how portable it is and only makes noise when you shoot a nail.  Here’s the basic anatomy of my nail gun: 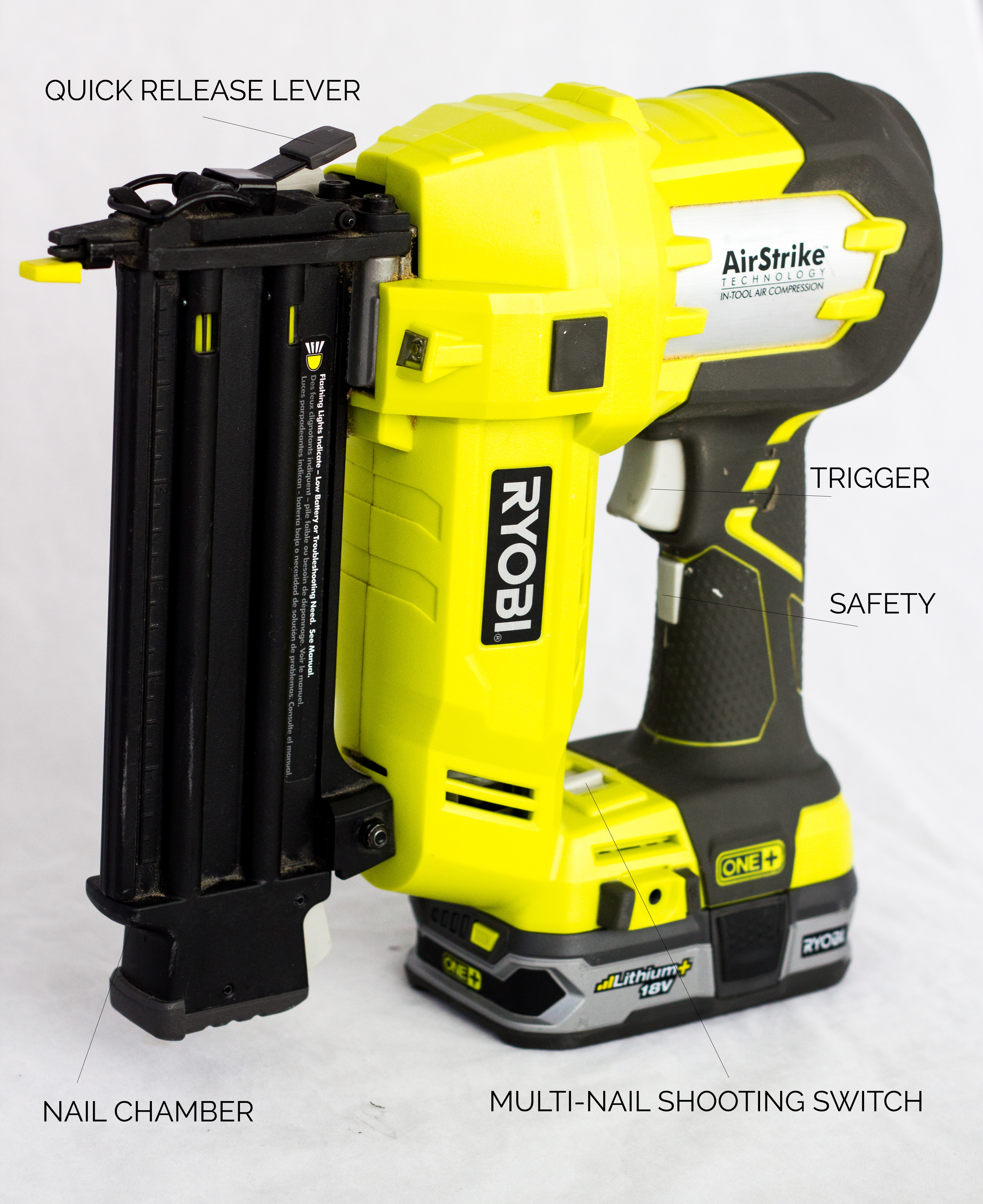 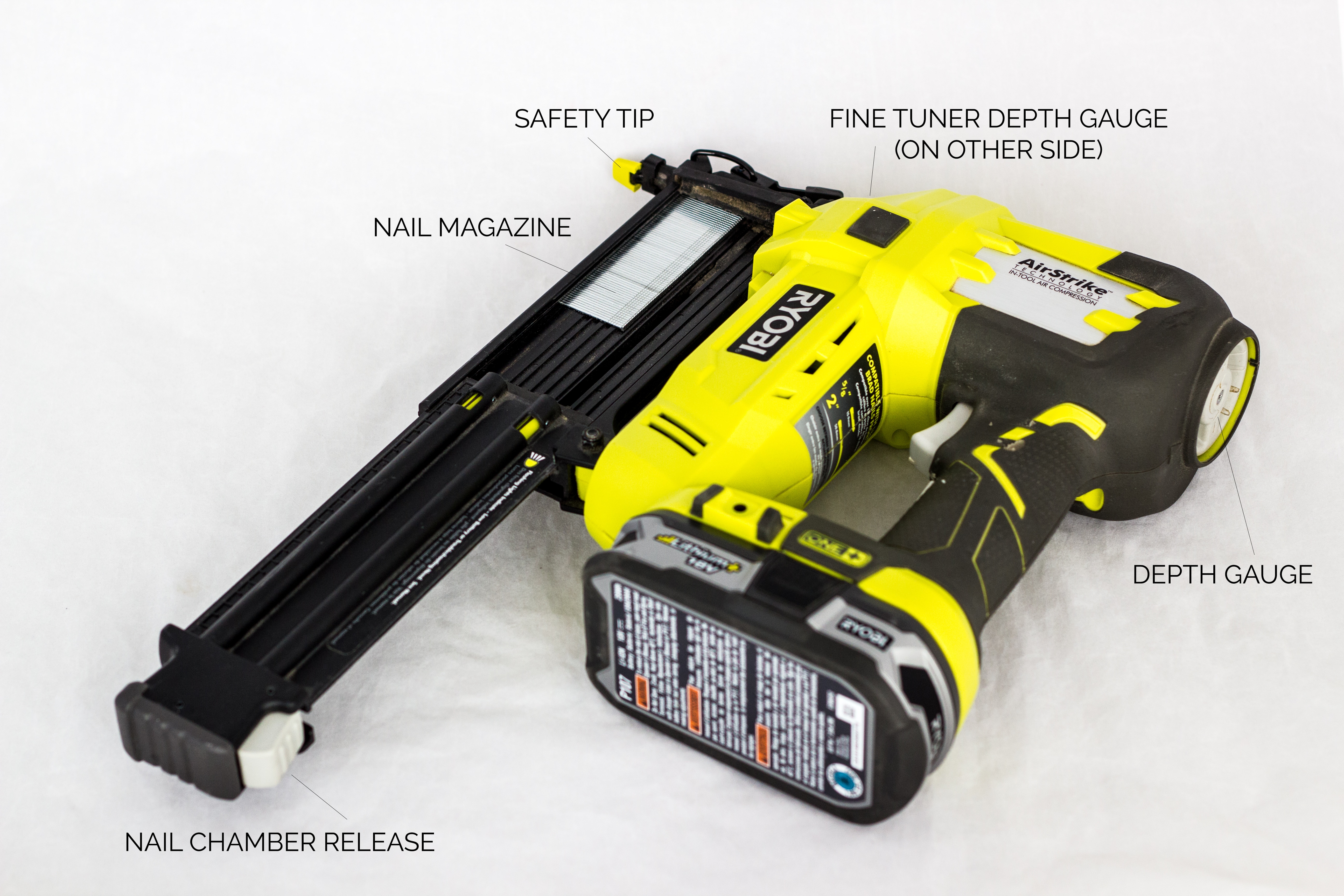 How to use a cordless nail gun Step 1:  Load nails

Make sure the battery is in.  There are two safeties on the nailer.  The first one is a small button next to the trigger that you push and it will turn on the light.  The second safety is the tip which must be compressed against the surface to be nailed (like the wall) to disengage the safety.  Then you can push the trigger down and a nail will shoot out.  This makes it pretty safe and you can be fairly sure that no nails are just going to shoot out willy nilly and stab you in the foot.  Be smart when using power tools!

To adjust the depth:

You can adjust the depth that the nails go in by turning the depth gauge found on the back of the barrel or by using the fine tuner depth gauge.  Play around until you find the depth you need.  You can also do the multi-nail shooting function to have nails come out quickly without having to disengage the safeties each time.

To clear out a jam:

Sometimes the nail gun won’t fire and you have to do a little troubleshooting.  The first thing is to remove the battery.  Then you can use the quick release lever at the tip to clear out any nails that might be stuck at the tip.  Sometimes the gun won’t work if the magazine is down to about 5 nails.  I also will play with the multi-nail shooter switch and depth gauges because for some reason that can trigger a glitch as well.  And often it won’t work if the battery is too low.  If you still can’t get it to work, you may have to take it into Home Depot to get it serviced.  This January I had to send my nailer to Las Vegas and pay about $80 to get it fixed because of an internal problem.  However my nailer is like 6-7 years old and I’ve used it a lot and lent it to people.

Here is a quick video I made on how to use a cordless nail gun: 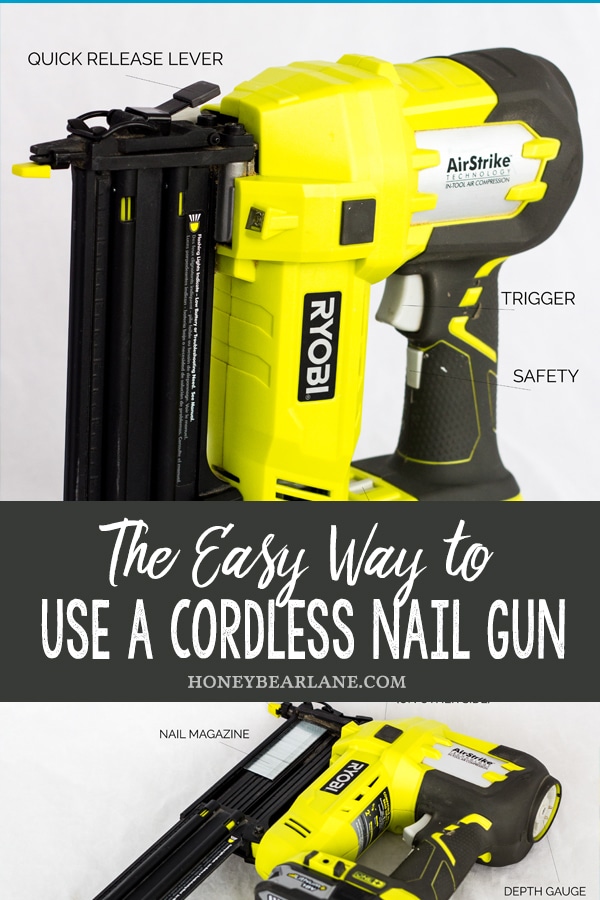 Don’t forget to check out the other tutorials in this power tools series!

This work is licensed under a Creative Commons Attribution-NonCommercial-ShareAlike 3.0 Unported License
85 shares