Making your own couch slipcover is a great way to update an old couch, change the color, or be able to wash out marks made.  I made these couch slipcovers in white duck canvas, which is definitely a little harder to keep clean.  I have since personally switched to beige slipcovers and they seem much easier to keep looking nice. 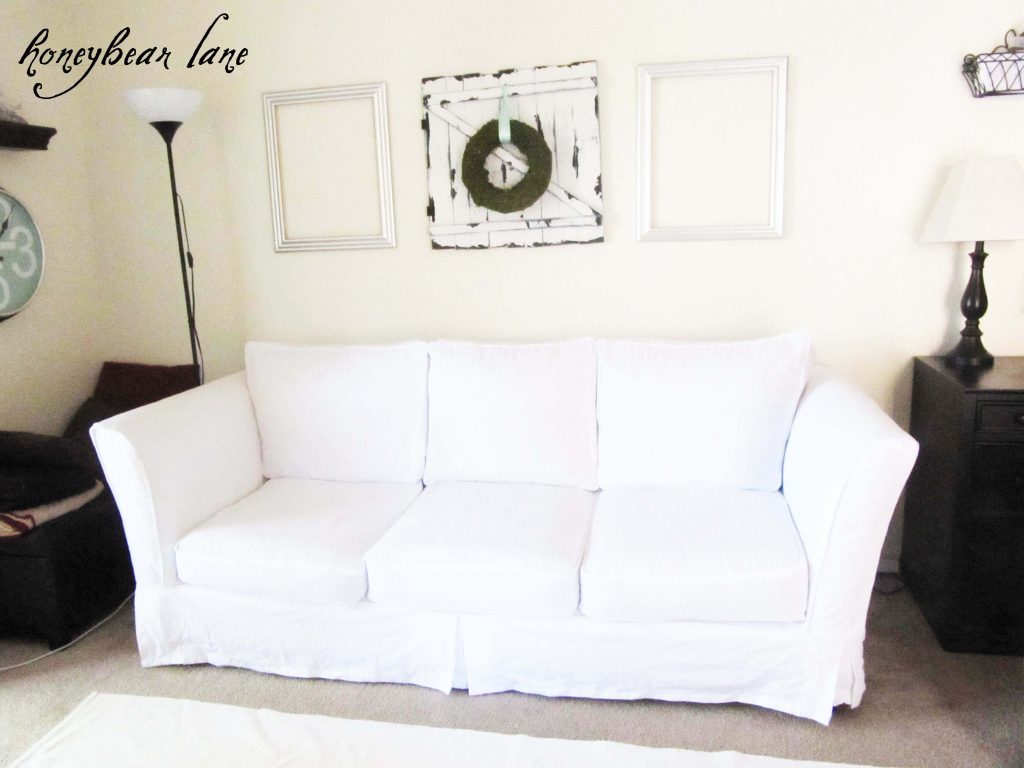 I did it!  It was a little rough going in the end but I powered through and finished.  What a conquest!
Do you remember my original couch? 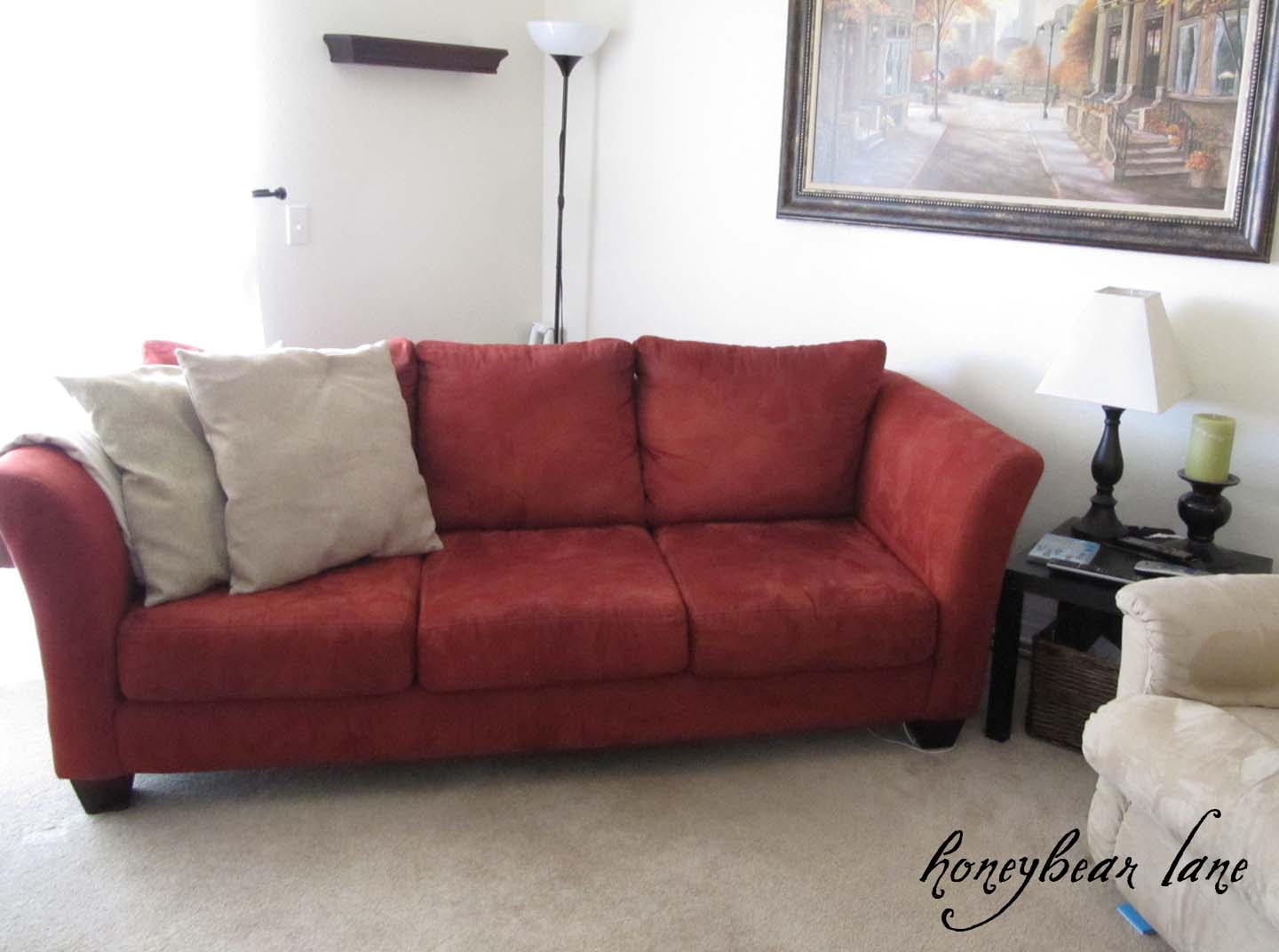 It actually doesn’t look half bad in this picture…but believe me, the material was terribly worn and the dirt was just ground in.  I might have revitalized it if I’d paid someone to come clean it professionally, but I was really tired of the red.  It is very limited in my decorating.

So I decided to get a slipcover.  But after looking around a lot on the internet, the most affordable one for me was still kind of expensive and not really what I wanted.  And after I made my wing chair slipcover, I knew I could make one for my couch.

I wanted white canvas.  I debated white for a VERY long time and still decided in the end that yes white will be a little more maintenance, but I can always bleach stains out of it and I really wanted white!  And after having a white rug, I thought “Well a couch slipcover has to be easier to keep clean than a rug!”

The thing that finally sold me on the white slipcover was the idea from The Inspired Room of using quilts on top of your couch.  This really opened up my eyes to the possibilities of “dressing up” your couch with quilts!  Now I’m planning on making lots more quilts for my couch, especially for all my favorite holidays.  I made this zig zag quilt for the standard every day one.

So I saved up some money and bought my fabric.  I got 10 oz white cotton canvas from Fabric.com. I consulted their upholstering guide to figure out how many yards to buy.  I knew that I was going to make individual cushion covers for both the seats and the back rests so I added some more yards.  I bought 22 yards.  And I got too much.  I think I still have like 3-5 or more yards left over.  But that will be handy if something gets ruined and I can make matching throw pillows!

For my couch slipcover, I started with all the cushion covers first.  I knew it would be the most straightforward and would ease me into the project.  I cut out very large pieces of fabric and pre-washed them (which was a pain but the fabric shrunk quite a bit in the wash!)  I did not want to make a custom fit slipcover and then wash it and have it not fit at all…which it wouldn’t have.  It was terribly wrinkled so I had to iron a lot of it which was very time consuming.

The first thing I did was tear the cushion backs off the back of the couch, since they were sewn on.  I just got my seam ripper and went to town.  This is how it looked: 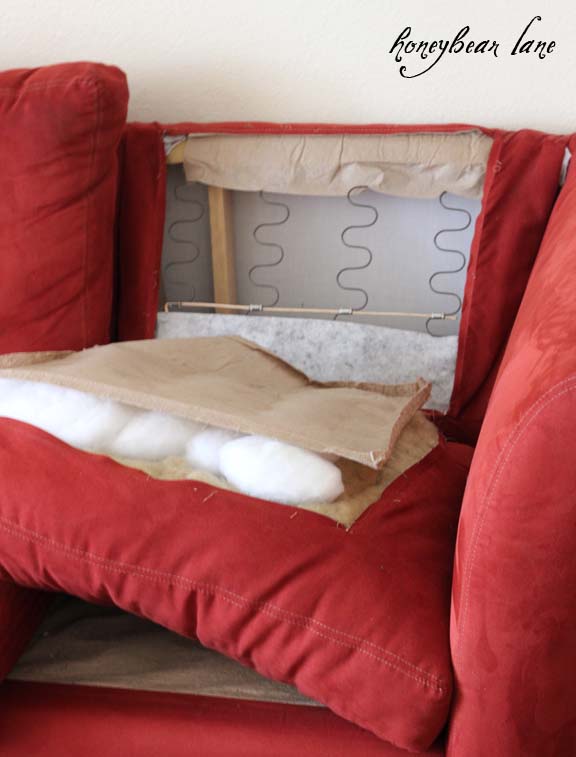 Pretty scary right?  I had to sew some white felt onto the back of the back cushions to keep all that stuffing in.  I sewed it by hand so it took some time.  Then I also hand sewed the brown thingy back onto the couch back. 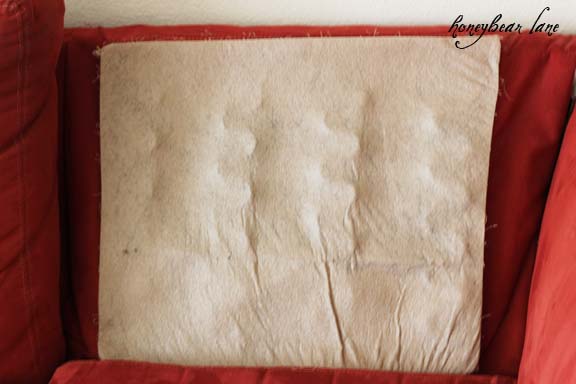 (I haven’t sewn it yet in this picture.)

After doing all that, I sewed the couch cushion covers.

The next step after the cushions was to cover the rest of the couch. 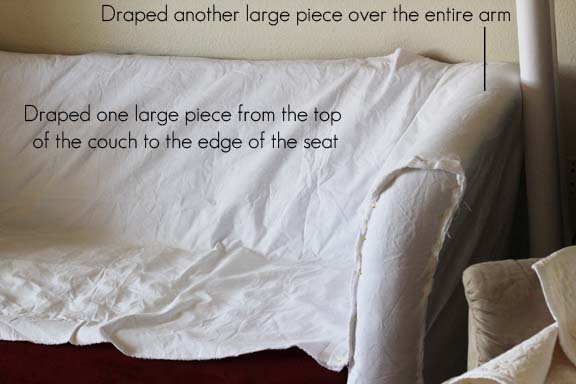 First I cut huge pieces the length and approximate width of the couch and kind of rested it on the couch, putting a few pins in the top to keep the fabric from sliding down.  Then I draped another large piece over the arm rest, although I didn’t pin that piece to the large couch piece. I did the arms separately first.

To make the arm fronts, I took two large long rectangle pieces and pushed a few pins in to hold the piece up as I traced the shape around with a fabric pen.  After tracing, I cut them out (two layered pieces of fabric so I could get two identical arm fronts) with about a 1″ buffer outside the pen to allow for the seam allowance and piping.  Then I sewed on the piping and made sure to sew the piping on opposite directions (you don’t want your arms to be facing the same direction.)

After I sewed the piping on, I turned them right side facing the couch and pinned them to the arm pieces…it really was pretty simple.  Just make sure that you pin everything inside out.

After doing the arms, I pinned the arms to the main couch piece.  To get a better idea of where exactly to sew, I traced a line with my fabric pen.  This always helps me so much since my edges are always really jagged and uneven (until I trim them later.)  I then sewed those together. 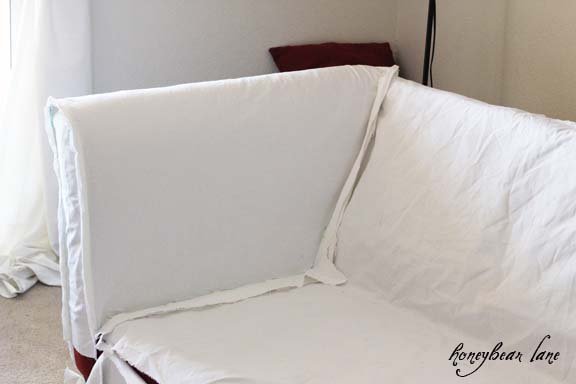 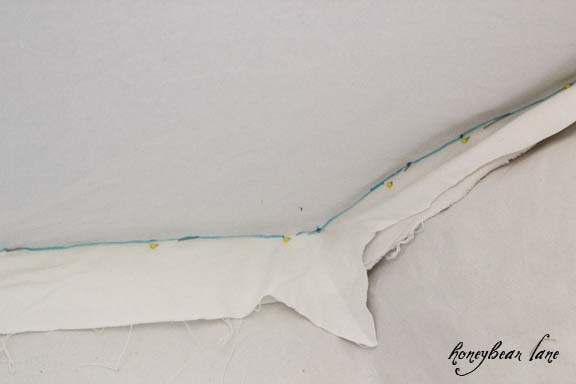 To do the back side, I used safety pins to hold up the large piece of fabric so I could cut it to the approximate size and then I repinned it (with regular pins) more accurately and sewed the back on.  Actually really easy! 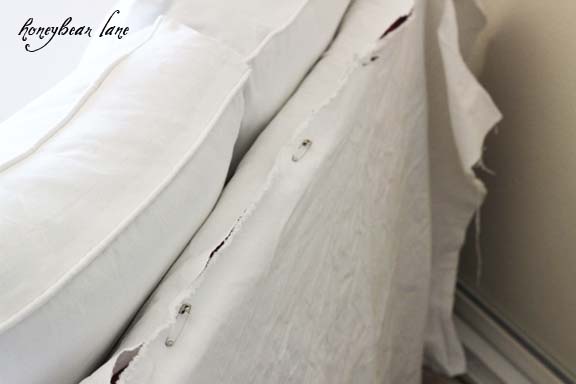 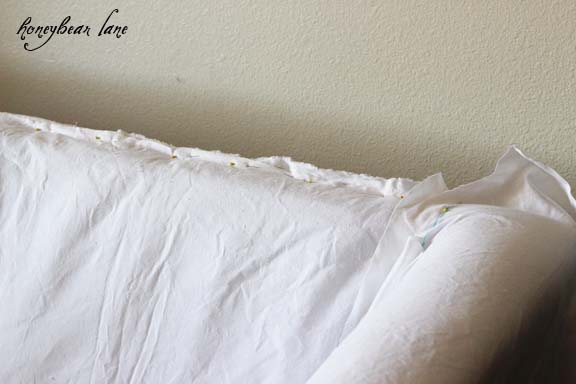 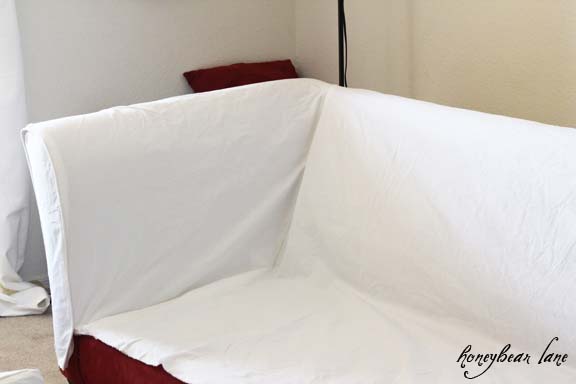 Starting to come along!  Next post will be the bottom skirt part and the velcro on the back.  And the finished result!!! 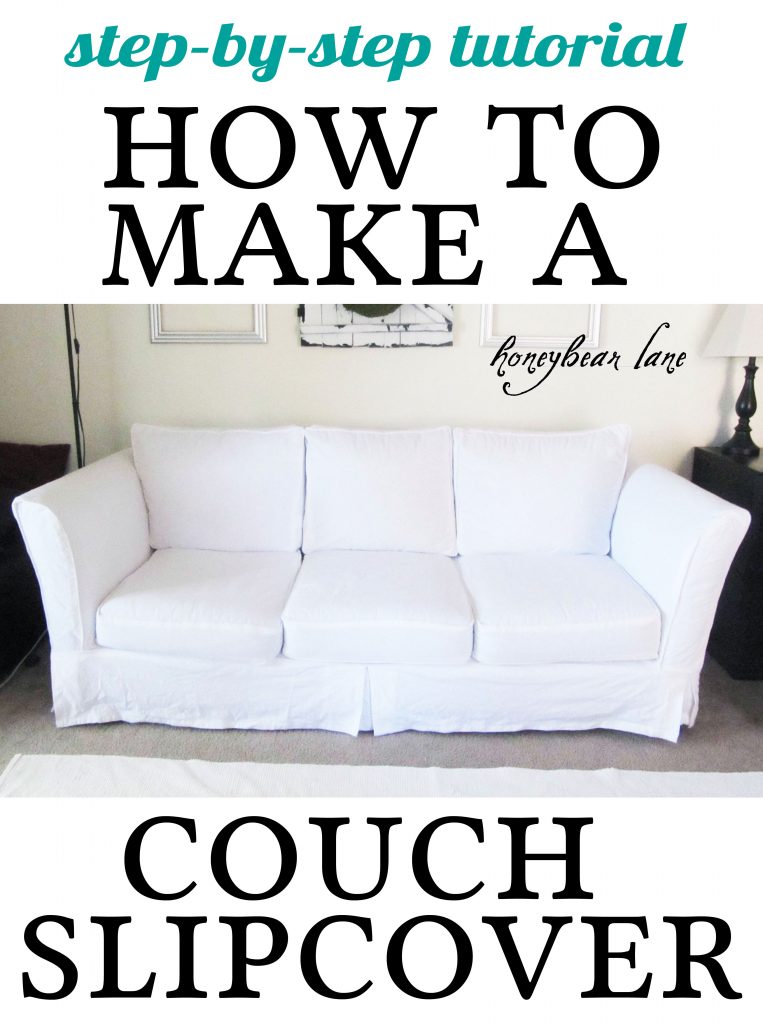 Click here to see Part 2 and the Slipcover Reveal!!  You might also want to see How to Make Cushion Covers and my Wing Chair Slipcover!

This work is licensed under a Creative Commons Attribution-NonCommercial-ShareAlike 3.0 Unported License
6995 shares